In his 1563 Fischbuch the Swiss scholar Conrad Gessner (1516-1565) describes a species of fish so oily that fishermen use it to burn their lamps. A puzzling statement… with the possible exception of whales, which were considered fish, most fish do not make for good fuel.

However, the description gets even stranger. On the next page Gessner describes another species which he claims ‘develops from the first’. At first glance it is unclear what he means by this. From the text it is fairly evident he doesn’t mean the first fish is a young specimen of the second, they really are two different species. And as if all this wasn’t strange enough, Gessner then points out that, like the first species that can be used to burn lamps, this second also has a peculiar use. It can be used to catch wasps.

Gessner calls the first fish schmelzling, a telling name that suits the anecdote about the fishermen. In German, schmelzling is related to the word schmelzen, melting in English. A schmelzler is a melter, something that melts. Since Gessner describes the fish as extremely oily, I can image what he means. He adds to this that this fish tends to fall apart in your hands. 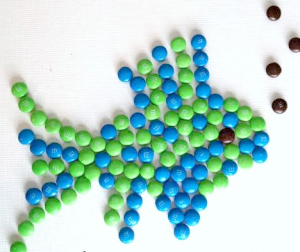 The second fish is called membras. Like schmelzling this is not a name that immediately rings a bell. Consequently, it’s unclear which species Gessner was writing about. In my research I often come across descriptions such as these, which are at first glance so strange they present a set of puzzling questions. In these cases it usually helps to first determine which species the author was talking about.

Juveniles and geriatrics
Since I know Gessner claims the membras develops from the schmelzling, I could ask myself if perhaps the latter is a young and the former an adult specimen of the same species. It was not unusual around this time to call a fish by different names at different stages in its life. Juvenile fish can look quite different from their adult counterparts. However, Gessner makes it clear to his readers when he is talking about young specimens. For example, when describing young salmon, he describes this as junge Salm (young salmon). He does not do this here. 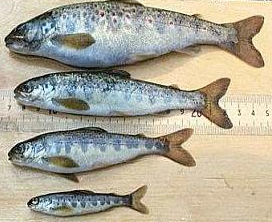 Looking at fins
In cases like this I look at the illustrations for confirmation. In this particular case these immediately show that these species may be similar but they are not the same. Fish are quite easy to tell apart by looking at certain physical characteristics, such as the position of the fins and the length-width ratio of the body. In this case, the fins provide sufficient information. The dorsal fin of the membras is implanted further forward than the beginning of the pelvic fin, while the dorsal fin of the schmelzling is implanted further back than the pelvic fin. In addition the membras has a very distinctively shaped snout. 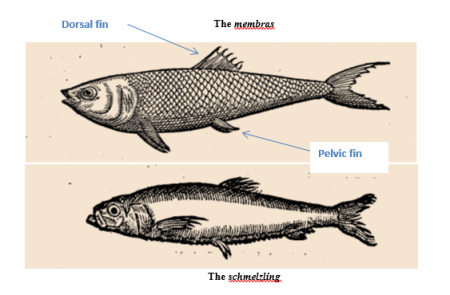 So, what is a schmelzling?
So which two species are these? It is now time to look more closely at Gessner’s description of these fish. He writes that the schmelzling is a small species, with a row of sharp scales on its belly. The latter remark suggests this is a member of the herring family, as this is a very distinct characteristic of this group of fishes. As mentioned Gessner remarks that this fish is so oily it falls apart in your hands. He writes that when they encounter fishing fleets a layer of oil forms on the water surface. This oil, he states, is collected by fishermen, who use it for their lamps:

Although this seems a bit far-fetched, I can now figure out which species he is talking about. The schmelzling may be the sprat (Sprattus sprattus), which belongs to the herring family and is one of the oiliest fishes in existence. If I now look at the illustration again, I can confirm this. The position of the pelvic fin and overall appearance of the fish corresponds with what a sprat looks like. 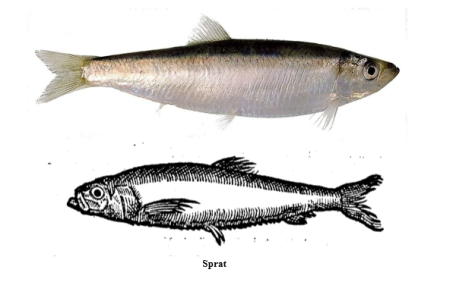 Again I can turn to the illustration for confirmation. The depiction of the membras displays features that are typical of the Baltic herring, such as a long, angular snout, and pelvic fins that are positioned further back on the body than the origin of the dorsal fin. 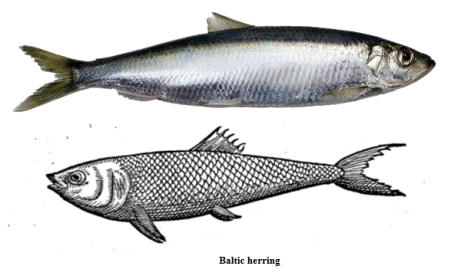 What about the wasps?
Now that I know which fishes Gessner was talking about I can begin to answer further questions. You can read about this in a later blogpost, which will explore Gessner’s sources.

This post also appeared on the Arts in Society Blog.